With Maria Montessori, something new and alive came into the childrens’ world. The adult was given a different way to see the child, to approach them and their way of being, to catch their own needs and desires. The children themselves became Maria Montessori’s primary teaching master. She pointed out herself that “it is the child that shows the way, and I follow them. ‘Help me to do it myself’ should be the basis for the adult to help the child to come in contact with his/her own inner abilities.”Maria Montessori med barn So, who was this remarkable woman who’s thoughts and ideas has such an increasing impact in today’s school and society? Maria Montessori was born in Italy, 1870, during a time when the requirements for a firm connection with reality was growing even stronger. Studies in philosophy, anthropology, experimental psychology and medicine made her well aware of the current flow of the times and provided her with insightful observations in various scientific areas. After graduating as Italy’s first woman medical doctor, she served as an assistant in the childrens’ department of Rome’s psychiatric clinic. Through her work with development-hindered children, her pedagogic interest awakened. Continued studies gave her incentive to parallel the psychological and medical treatment using concrete senses-developing material in her work with the childrens’ development. The results totally exceeded her expectations. But, Maria Montessori searched further into the childrens’ world. After a few years of running a special school for development-challenged children, she began trying her teaching theories on otherwise normal children who often had a rather troubled background. She began with the lowest pre-school aged children but expanded her development thoughts and her working material to also suit older children. Thanks to her observation abilities, she made, during her working years in “Casa dei Bambini”, so many new discoveries about the child’s nature that it layed the foundation for her life’s work. There she found that children, on their own, gravitate toward the development-stimulating material that she used earlier in her work with the development-challenged children. Stimulated by the result, she shaped and built, little by little, what the children showed to be their needs. She used trial to understand how each piece, each series of items, should be balanced to meet the childrens’ stages of development. The children themselves showed her what natural curiosity and spontaneity meant for senses development. She also found in her work that if the children got the right chance for development, it exposed the deep-going qualities in it’s own character that had thus far been unknown to the adult. So which were the qualities that Maria Montessori found to be normal for an harmonic child in the early development stages? A love for order and work, ability to concentrate spontaneously, adjustment to reality, need for individual quiet moments, ability to choose and act accordingly, a wish to take initiative and to be independent, take initiative for social cooperation. According to Maria Montessori, the child is born with a “blueprint” for his/her development. The development occurs at different rates for different children, but a parallel relationship between the individuals is obvious and the periods are similar. Maria Montessori calls those times “sensitive periods” and thereby means time points in the childrens’ lives, where they are especially receptive to different functions and activities such as language learning, senses development, order, perfectionism, etc. As a result of the inner mental activity, these periods burst forth as opportunities for the individual. First, through integration between these inner impulses and an outer environment, a build-up of personality can occur. The environment and the adult must use these opportunities by creating the outer conditions that responds to the inner needs within the individual during the different periods. Maria Montessori has in her book The Secret of Childhood written down the ground rules in her view of children and their relationship to the adult and the world in which they live. Speaking in her book, the philosopher, psychologist, doctor, pedagogue Maria Montessori as well as the warm, practical human, that from her own personal-colored religious and peace-focused view of humanity, in her love for and caring of children, wants to waken the adults interest and understanding of the growing individual. (forward from “Barndomens gåta”, Maria Montessori – translated by First Site Web Design) 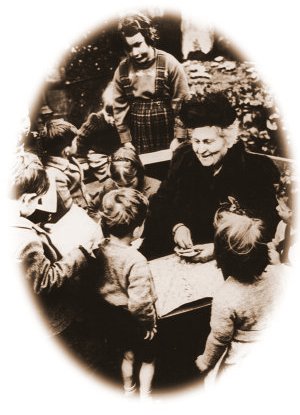